Many Chinese Medicines contain parts of wild animals, including those of endangered species. Whether endangered or not, poachers illegally kill wild animals in order to sell their valuable body parts to the industry.

The industry is willing to pay substantial amounts to the poachers because of the baseless belief that certain animal parts have medicinal properties for humans.

This page takes a look at just a few of the animals affected.

36 different species of animal are used in traditional Chinese medicines, including the endangered species; the tiger, the rhinoceros, and the sea horse.

Rhinoceros horns are used in Chinese medicines because of the belief that they treat fever, convulsions, and delirium.

The Rhinoceros is an endangered species. Heightened demand from traditional Chinese medicine consumers across Asia means their horns are worth nearly twice as much as gold. In fact, a Rhino’s horn is worth more than the actual Rhino would weigh in gold! This means that Rhinoceros poaching is common wherever in the world the Rhinos can be found. They are not even safe in animal parks and sanctuaries.

The poaching of Rhinos for their horns leaves many young Rhinos orphaned, too young to fend for themselves.

Image: The picture on the left shows a victim of Rhino poaching due to Rhino horn being in Chinese medicines. On the right, a Rhino that has had its horns dug out after being incapacitated, but not killed, can be seen. Suffering agonizing pain, it is highly likely to either bleed to death, die from the shock of the trauma, die a painful and prolonged death due to infection setting in, or die due to no longer being able to defend itself against others without it’s horn. Source 1

Officials in the countries trusted to protect their Rhinos are often corrupt and complicit in the killings. Much of the illegal hunting is undertaken by organised crime gangs.

The violence poachers use towards Rhinos is brutal. Many Rhinos are killed using one of a number of merciless methods before their horn is removed. In other cases, the Rhino is still alive, and in incredible pain, after the horn has been dug out of its face. Rhinos have often been seen writhing around in pain due to the agony being so unbearable. Many of the Rhinos who survive the agonizing experience, then sadly die. Those who do not die due to the poachers attack, cannot defend themselves against other animals without their horn.

In the last 100 years, the Rhino population has decreased by 95%. Sadly, it is now thought that the Rhinos only hope of surviving at all is in captive breeding.

Image: An orphaned Rhino grieves for it’s dead mother, a victim of Rhino poaching. Young Rhinos are also targeted if their horns have begun to form. Source 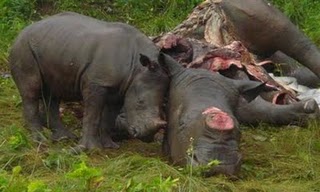 Tiger’s bones are used in wines that then claim to have medicinal qualities. They are also used in plasters and medicines in the belief that they treat arthritis and other joint complaints.

There are further far-fetched beliefs about other tiger body parts, including tiger penis being an aphrodisiac when eaten in soup.

Although it is now illegal to kill tigers in China, tiger poaching is still prevalent throughout the world because the trade in tiger parts is so lucrative.

To get around the ban on killing tigers in China, it has been reported in the UK press that Chinese zoos let their tigers waste away and die, without veterinary intervention to treat their lesions and infections, as they are worth more to them dead than alive. The tigers are expensive for the zoos to keep, whereas their bones can be sold for large amounts of money for use in traditional Chinese medicines when the tigers die.

Image: The image on the left shows the high number of tigers crammed in to each bare, under stimulating enclosure at the zoo as they scramble for the food. The image above right shows an emaciated tiger wasting away at the zoo. Staff there shrugged and said they were waiting for the tiger to die. Source 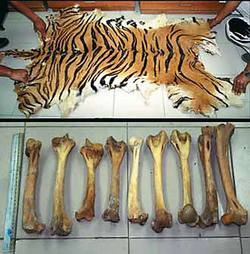 Black bears, or Moon Bears as they are often called, are both poached in the wild and farmed for their bile. Believers in traditional Chinese medicine think that bear bile promises to treat a wide variety of illnesses and injuries, including liver ailments and headaches. There are alternatives to the bile, but the Chinese medicine industry believes consumers prefer the real thing, which means the bile trade is lucrative.

In these cruel farms, black bears spend their whole lives living in tiny ‘crush’ cages, hardly able to move. This leads to muscle dystrophy. In some farms, between being milked for bile twice a day, bears are moved to slightly bigger cages where they can actually turn around.

Being milked for bile involves tubes being forced in to open wounds in the bears’ abdomens and gall bladders, (or catheters are permanently left in the wounds), to drain their bile out. This is a severely painful process the bears have to endure on a daily basis and they can die in agony due to infection as a result.

Bears understandably suffer terrible mental stress on the farms due to this and their living conditions. They moan, bang their heads against their cages, and chew their own paws. The mortality rate is high.

Farmed bile bears suffer from physical problems such as loss of hair, malnutrition, stunted growth and muscle mass loss. To add to their misery, they are often forced to have their teeth and claws painfully extracted.

Bears stop producing bile after a few years. They are then routinely killed and their meat, fur, paws and gall bladders are sold for large amounts of money.

Having 14,000 black bears suffering on these farms across Asia has not reduced the number being poached in the wild. Bear numbers are still reducing and are at risk of dying out in the wild.

Image: A Black Bear in a typically tiny cage on a bear bile farm. The bear cannot turn around, straighten up, stretch, or even shuffle a few inches backwards and forwards it’s entire life. This cruelty is unthinkable, even without the extreme daily suffering the bear is forced to endure with the catheter that is inserted in to it’s stomach, draining the bile out and leaving the bear vulnerable to deadly infection. Source 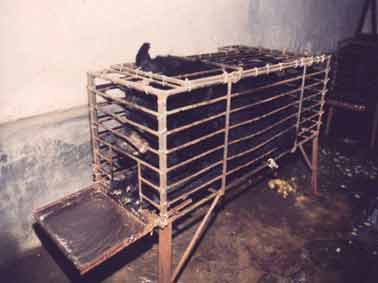 There is much more animal abuse associated with China and other Asian countries, such as the horrific cat and dog meat trade, where cats and dogs are skinned and boiled alive after being kept in appalling conditions and treated despicably. Also see the Bush Meat page.

Then there is the ivory trade, where vast numbers of elephants are brutally killed for their ivory tusks because the Asian market pays well for them.

Not forgetting the fur trade, which is a huge and very lucrative industry in China – in fact it is so big, China supplies most of the worlds’ fur. To produce it, innocent animals are kept in appalling conditions, treated horrifically badly, are skinned alive and can live in pure agony for up to ten minutes after being skinned alive.

On this site there are many varied ways you can help stop animal cruelty, and there are ways that will suit everyone, no matter what your personality.

If you would like to find organisations needing your action and support to fight against a specific type of cruelty, enter the type of cruelty you want to help stop (for example “Chinese Medicine Animal Cruelty”) into a search engine online, or search bar on social media.
Use a fundraising search engine so you can raise money to help animals with every search.