Grand National And Other Events Cruelty

The Grand National horse race, & the horse racing industry in general, is the cause of great suffering to a huge number of horses: From horses that die on the race course, to ones killed, abandoned, neglected, starved and sold to be slaughtered for the horse meat industry. This happens to race horses when they are no longer of use to make money with, or when they do not meet expectations to begin with.

Horse racing is a hugely lucrative money driven industry that exploits these highly intelligent, sensitive creatures for human gain.  When they lose their monetary worth, they are routinely discarded without thought.

Many thousands of horses are produced annually in order to be able to generate a few particularly fast ones to compete in horse racing. Of the many thousands bred to race, very few make the grade. The fates of many of these horses are often cruel and brutal. This can also be true of ex-race horses, retired from competing because they no longer make money. Many are retired young, before even fully maturing.

Despite overwhelming evidence, many people refuse to believe that this goes on in the industry, due to not having witnessed it themselves.

Image: Horse falling over and getting trampled on during a race. Source 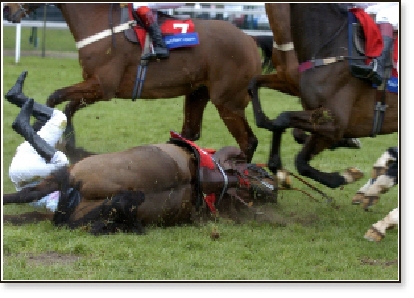 Facts about the world of horse racing: 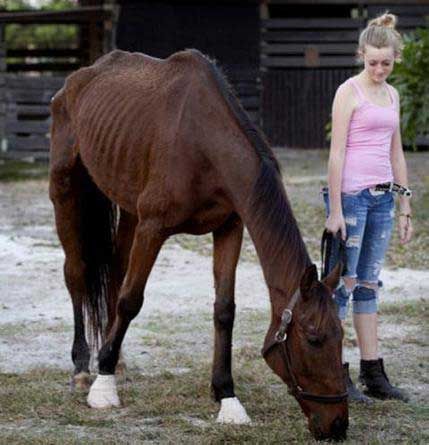 Image: Ex-race horse Traveller (left) was sold for £20,000 just three years before he was rescued by LEARN rescue in a starving and neglected state along with three other horses starved and neglected by Dwight McCloud at a farm in Sommerville. Whisper (right), with the huge back burn caused by Kerosene was one of them. The chemical had burned through the skin and some muscle, and maggots were also eating the tissue. The pain will have been unbearable.The horses were so hungry, they were trying to eat wood shavings in the stall, among other inedible materials. Source

The Grand National horse race is a huge event in the horse racing calender. More than 70,000 people watch this race from the stands at Aintree racecourse, and around 600,000 viewers from around the world watch it live on television.

In 2011, two horses died during the Grand National race: ‘Ornais’ and ‘Dooneys Gate’. Although the race course was supposedly  made safer for the 2012 race, another two horses died: ‘Sychronised’, a favourite to win, and also ‘According To Pete’. Further horses were seriously injured in the race and only 15 of the 40 horses that entered the race, finished it.

Commentators from the BBC who broadcasted the race, failed to even mention the deaths to viewers, as they seem to be considered unimportant to horse racing enthusiasts.

It was revealed that Synchronised was very nervous and anxious before the Grand National horse race. He even tried to throw his jockey off his back, unseating him. However, he was raced to his death anyway.

In subsequent years, even after the course was made supposedly safer, horses have died in 2013 and 2016.

Image: Every year, around 300 racehorses die on British race tracks. In addition to the hundreds raced to death, thousands more are killed, or abandoned to neglectful or abusive situations, every year because they can no longer run fast enough to be profitable. The image shows a horse dying during the grand national. Source 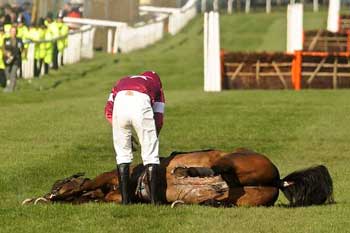 Celebrities reacted to the deaths during the Grand National horse race in 2012:

Adam Thomas, an actor from one of the UK’s most successful TV soaps,
Emmerdale, commented on Twitter “RIP Synchronised. Sychronised knew what was going to happen but was forced to race”.

The owner of According To Pete expressed his grief about his horse being put to death after falling and suffering a fractured leg. He said he would never again consider entering another animal in the Grand National horse race and added “You always think it’s going to be someone elses horse”.

British comedian, Ricky Gervais, writer of hit comedy ‘The Office’ said he would not watch the Grand National in protest of the cruelty. He added “I don’t think people should make horses jump over things being whipped and when they injure themselves they are put down because they are not worth having around because of economic reasons.”

Image: The moment the horse called Synchronised broke a leg and had to be killed. The fact the horse was spooked beofre the race started means the horse should have never been raced in the first place. Source 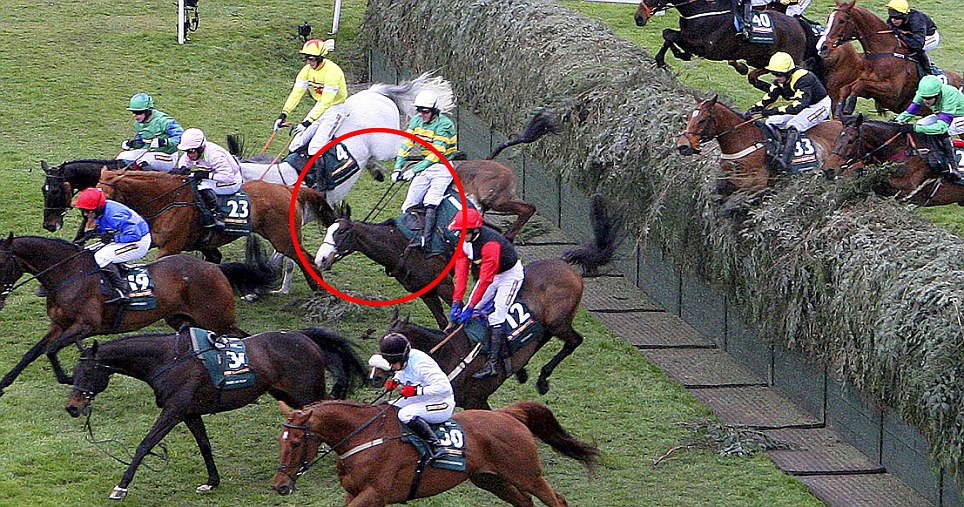 Although this page focuses mainly on the Grand National, the whole horse racing industry is responsible for horse abuse. There are sadly many horse racing events where horses forced to run suffer and lose their lives.

For example, at the Cheltenham Festival, UK, six horses lost their lives four days, at the 2018 event.

The British Horseracing Authority say they will undertake a review.

In 2012 they undertook a review at the Aintree racecourse, where the Grand National is held and made improvements to the course. However, horses continue to die and suffer as a result of the event.

You can avoid supporting the horse racing industry by never placing a bet on a horse, never organising or attending an event held at a Horseracing ground, and raising awareness of the issue.

You can share the information you have found on this web page on social media or blogs. You can also help by encouraging your friends and family to boycott any support of Horseracing and their venues.

Music acts sometimes perform at racing grounds. If you hear of singers or bands performing at such places, contact them to explain why you think they should use an alternative venue, and encourage your friends and family, and people on social media, to do the same.

How To Stop Animal Cruelty

On this site you will find many varied ways you can help stop animal cruelty, and there are ways  that will suit everyone, no matter what your personality or lifestyle.

You can learn about how to avoid funding animal abuse you are not even aware you are funding.

If you would like to find organisations needing your action and support to fight against a specific type of cruelty, enter the type of cruelty you want to help stop (for example “Race Horse Cruelty”) into a search engine online, or search bar on social media.
Do this through a fundraising search engine so you can raise money to help animals with every search.