Investigations by animal rights charities in to Circus Animal Cruelty have found that heartbreaking cruelty is inflicted on the animals.

They are continually physically and mentally abused until their spirits are broken and they are too ground down to go against their trainers.

Bears, Elephants, and other animals do not voluntarily do tricks such as jump through fire or on trampolines. They don’t perform such tricks because of their love of entertainment.

They do it because their spirits have been broken and they are petrified of what will happen to them if they don’t.

This page looks at what typically happens to a circus animal. The level of abuse these beautiful creatures suffer in the name of human entertainment is shocking and saddening.

The abuse begins for these animals when they are young. Animals are often stolen from the wild for use in circuses and other areas of the animal entertainment industry.

Other than circuses, there are many more attractions that use and abuse animals for profit. You can find out how you can avoid funding cruel animal attractions here.

Circus Animal ‘Trainers’ force animals to performs pointless tricks for our entertainment. It goes against all of their instincts and is also a cruel form of mental torture.

These individuals also use various torture implements to inflict Circus Animal cruelty by forcing the animals to behave in the way they want. Some of these implements include:

Image: Bull Hooks Being Used On An Elephant At Ringling Bros. Florida. Source

Image: Rope Forcing An Elephant To The Ground At Ringling Bros. Florida

Mary Chipperfield was caught on undercover video beating a Chimpanzee called Trudy with a Riding Crop.

Mary is guilty of abusing a chimpanzee called Trudy. She did not want to go into her box and was screaming in protest.

Mary Chipperfield loses her temper and begins to beat her, striking her across her body and face with her hands and kicks her in the back. She then beats Trudy with the riding crop.

Mary Chipperfield then starts to call her an idiot and stupid. Trudy is crying her eyes out and runs to her ball that she uses for a comfort blanket, but Mary says she is not having that. The abuse continues.

This woman who supposedly loves animals then starts to call her an idiot and stupid. Trudy is crying her eyes out and runs to her ball that she uses for a comfort blanket, but Mary says she is not having that.

All of this was recorded on damning video evidence used to convict her in court. 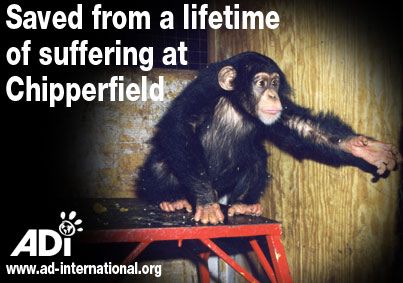 I’m pleased to say she is now living a happier life in Monkey World, a sanctuary in Dorset, UK

He beat her just because she wouldn’t do what he wanted. The video below shows what he did:

Unfortunately these two animal abusers were acquitted on 28 other charges as:

Were not considered under the legal definition of animal cruelty at the time.

They Were Only Fined £8500 For Their Crimes

It is commonplace for animals such as Trudy and Flora to be beaten into submission. Often they are captured as babies, ripped away from their mothers to begin a life of cruelty and abuse.

The mothers pine for their babies as they are dragged away for our entertainment.

Animals such as Elephants and Monkeys are highly intelligent and social creatures. To rip them away from their families when their lives are just starting is just barbaric to say the least.

They know what is happening to them.
Their reactions tell its own story
.

In the next section of Circus Animal Cruelty we look at the suffering of Circus animals as they are travel around the world.

Between shows, or during the off-season, travelling circus animals are kept in small transport cages for over 100 hours. They are chained to the same spot for days at a time.

They go without food, water and warmth. Often they will not see daylight and their cages within the trucks are too hot which can kill them.

The Elephant below, called Queen, was found dead in one of these vehicles when rescued by volunteers: 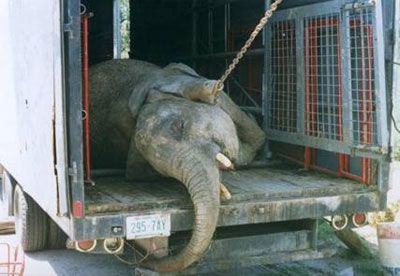 The animals have to eat, sleep, urinate and defecate all in the same place.

In the next section of Circus Animal Cruelty we look at the suffering of Circus animals as they are trained for live shows.

Animal Circuses get away with a whole host of abuse because they are not monitored properly by government agencies.

That is why the lives of these animals depend on undercover footage. This action brings to attention what is going on behind circuses’ closed doors.

Attempts to make such undercover surveillance illegal in certain American states means abuse will escalate if such legislation comes in.

In addition to the beatings and electric prods, Carson & Barnes Circus trainers were documented using blowtorches on Elephants.

The video below is not for the faint hearted.

The psychological effect on Circus Animals is plain to see from this footage. What a waste of magnificent animals lives.

Is it any wonder Circus animals go on the rampage. Animals, just like people, have their breaking points.

Janet the Elephant ran amok with 5 children on her back at the great American circus. She was unfortunately shot dead with 47 bullets.

The Florida Police Officer who killed her, Blaine Doyle, said: “I think these elephants are trying to tell us that zoos and circuses are not what God created them for … But we have not been listening.”

The following quote is from PETA: “In more than 35 dangerous incidents since 2000, Elephants have bolted from circuses, run amok through streets, crashed into buildings, attacked members of the public, and killed and injured handlers.”

This is what you see when you go to a Circus: “Animal friendly family entertainment”, with happy visitors, animals and trainers, all contributing to what is a lovely day out.

Is this what you still see when you look at this picture? 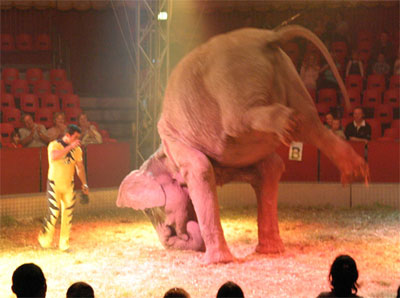 These tricks are unnatural and only happen after months and years of abuse as shows above. I don’t think the children and parents in the picture would be clapping in approval in they knew the truth!

Children get no educational value from this, other than how to exploit and disrespect our fellow animals.

Trainers are also known to drug animals and pull their teeth and claws out to make them more manageable.

These animals suffer in ways you cannot even imagine.

In the final section of Circus Animal Cruelty we look at some of the things you can do to help save circus animals from their abusers.

How You Can Help Stop Circus Animal Cruelty

Do not support circuses with animals in them. They still exist and tour. You are paying for these animals torture if you attend.

Don’t look the other way. Boycott this archaic form of entertainment and make our world a better place.

How you can help end Circus Animal Cruelty:

If you enjoy circus acts you don’t have to miss out. Go to one that has human entertainment only. They can be quite spectacular!

Below is a list of some of the world famous Circus acts that do not include animals in their performance therefore avoiding circus Animal Cruelty:

If you would like to find organisations needing your action and support to fight against a specific type of cruelty, enter the type of cruelty you want to help stop (for example “Stop Circus Animal Cruelty”) into a search engine online, or search bar on social media.
Use a fundraising search engine so you can raise money to help animals with every search.

Many Other Ways To Help Stop Animal Cruelty