Every day countless new animal cruelty cases are discovered where the extent of animal suffering purposely caused is sickening. There are many more animals that suffer and die because of human cruelty that are ever found out about.

Sadly, the number of animal cruelty cases happening is increasing. In many cases, the animal abusers are not caught. Even when they are convicted, their sentences do not fit the crime, considering the terror and pain the innocent animals are forced to endure. In some countries animal abuse is not illegal and people are even rewarded for it.

Sometimes, people post pictures and videos online of themselves torturing animals. This can lead to them being identified and prosecuted.

The animal cruelty cases on this page are just a tiny portion of the horrors that happen every day to animals that are completely undeserving victims of such malicious and vicious abuse. The examples serve to remind us why we need to do everything we can to help stop animal cruelty and suffering.

Dogs Drowned By Callous Owners They Trust In Greece

Animal Cruelty Cases Exposure 1: This rescuer from Greek Animal Rescue finds the body of a dog floating on the surface of the sea, with it’s head submerged under the water. He reaches under the water and finds that the dog was purposefully drowned by heavy rocks being tied to it’s collar. Greek Animal Rescue explains that the trusting dog probably willingly went in to the sea with it’s owner, then was cruelly drowned this way. No matter how much the dog will have struggled, it will have run out of strength to fight against the weight of the heavy boulders put around it’s neck. Animal Cruelty cases like these are not unusual in Greece, and in almost every other country.

Image: Dog drowned with its head dragged under the sea because of a heavy rock tied to is neck. 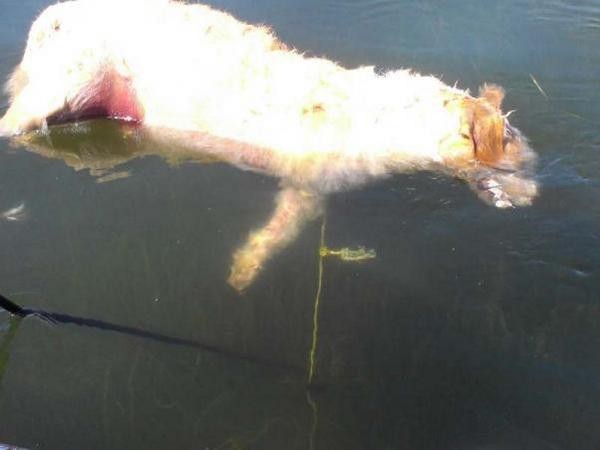 Animal Cruelty Cases Exposure 2: Monterion Dionte Davis, from Forsyth in the U.S, tried to hack off this dogs head. A vet, Dr Caldwell, fought very hard to save her, and she was named Hope in the hope that she would pull through, but sadly she didn’t make it. If you would like to, you can contact Dr Caldwell with thanks for his efforts, and with encouragement, at Caldwell Veterinary Hospital, 951 Hwy 41 S, Forsyth, Ga 31029. Phone: 478-994-8228, Fax: 478-992-8260.

Ahmed Fathy Faud Taye, (also known as Ahmed Mido), from Egypt threw an innocent dog off the roof of a high building, as shown in this video, below. The poor dog suffered with terrible injuries for three weeks and then died.

When the video was released, the identity of the perpetrator was unknown. Once Seventeen year old Ahmed’s identity was discovered, the Egyptian Society for Mercy to Animals, ESMA, took other animals away from him, including a dog suffering with broken legs. The identity of the camera man who willingly filmed the horrific event without intervening to save the poor dog has been revealed as Bahy Saber, (also known as Bahy Boogy, and Boogy.MJ).

Animal Cruelty Cases Exposure 3: Ahmed Fathy Faud Taye throwing one of a number of innocent dogs off the roof of a high building. The dog suffered in agony for 3 weeks before finally dying.

Below is a video that a veterinary surgeon recorded of Ahmed on the very roof he threw the dog off. He records Ahmed telling him that he has inflicted similar cruelty to other animals on a regular basis. In the video we also see him smiling, smirking and showing absolutely no signs of remorse or regret as he makes up excuses for why he threw the innocent dog off the roof. At the start of the video we see how far down the dog had to fall to the ground.

Because of being 17 years old he will not be punished, but even if he was 18 years of age, he would only be fined $30!

Video: Ahmed Fathy Faud Taye smiling & showing no remorse while he talks about how he threw an innocent dog off a high roof, who then took 3 weeks to die in agony, and how he has done similar to other animals.

Rough transcript of the above video in English:

Vet: The dog was alive for how long after falling?

Vet: There was any bleeding?

Dog Killer Ahmed: Yes from his teeth all of them was broken

Vet: He was suffering?

Dog Killer Ahmed: No no

Vet: Will you do it again?

Vet: If some one sues you what will you do?

Vet: How old are you?

Vet: Would you like it if someone threw you or your brother off the roof?

Dog Killer Ahmed: No but he bit my brother and made a scratch on his foot

Vet: So why did you do that to the dog?

Dog Killer Ahmed: Cause it was not a pure pedigree dog

Vet: Why you didn’t you just leave the dog in the street?

Dog Killer Ahmed: To get revenge on him.

Vet: Your friend Bahy [man who filmed Ahmed throw the dog off the roof without intervening] told me you are too lazy to get the dog down the stairs so you choose the easy way?

Dog Killer Ahmed: No no I just drop him. I was trying to drop him from another place first but then I choose this roof

Although Ahmed says in the video where he is interviewed by the vet that he would not do it again, it is suspected that the animals ESMA took away from him would have been his next victims. No animal is safe with people like him at large.

It is likely that the dog Ahmed threw off the roof had many broken bones and internal injuries caused by the fall, and not just the smashed teeth Ahmed spoke of in the video. These are the injuries the dog will have taken 3 agonising weeks to die of.

Stray Found With Eyes Gouged Out

This dog was known as a friendly stray to a number of locals in South Carolina in the US.  One day somebody who recognised the dog was horrified to find the dog in this state, after it had been tortured and had its eyes gouged out!

The poor, innocent dog suffered terrible pain and fear and is obviously now completely blind because of an extremely sick act of cruelty. 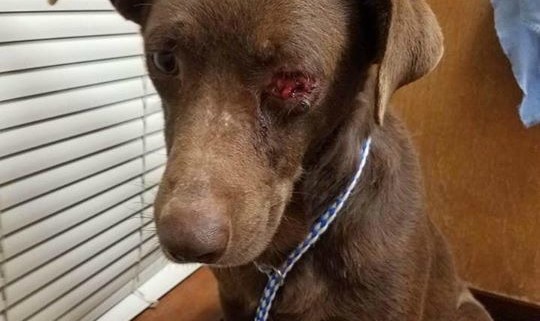 It is believed that Stephen Jenkins buried the puppies while James and Lorraine Perks were fully compliant in the plan, knowing full well the puppies were alive.

In addition to the puppies who had been buried alive, the RSPCA found 15 puppies and nine fully grown Staffordshire Bull Terriers kept in squalid rabbit hutches with no bedding in the Perks’ garden. One hutch held four of these adult dogs. They were crammed in the hutches for 23 hours each day, being allowed out for just one hour a day.

Those 15 puppies and nine dogs were removed from the address by the RSPCA inspectors following the discovery of the buried alive puppies, who described the conditions as “disgusting”.

Image: One of the puppies buried alive, desperately gasping for breath, after being dug up from its grave. Source 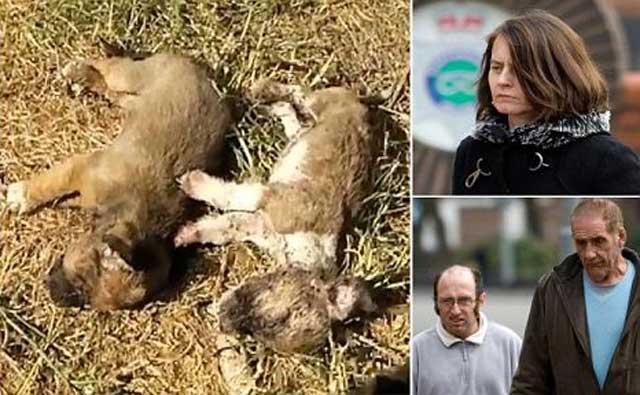 “RSPCA inspector Jayne Bashford said:
“Two adult bitches had clearly been bred from several times. The dogs outside, confined in rabbit hutches, had no bedding and barked uncontrollably as if pleading for help.

“As the dogs were being checked over, a police officer was told that a puppy had died that morning and it was then that the abhorrent discovery was made of two tiny puppies gasping for breath beneath a patch of disturbed soil.”

Another puppy, also still breathing and covered in faeces, is pulled from the grave squirming and desperately gasping for breath.

Sadly, the puppies suffering is so severe that they are euthanised.

These breeders had previously been reported for selling sick and dying puppies.

James and Lorraine Perks and lodger Stephen Jenkins, have now been jailed for 25 weeks for a string of animal cruelty offences. The judge gave them the maximum sentence allowed under the law as it stands.

Martyn Hubbard, RSPCA regional superintendent for the West Midlands, said: “It is our experience that, when puppies are bred and sold as commodities purely as a means of making money, the dogs’ welfare needs are way down a list of priorities.

“We need the public to be clear that, by buying puppies from irresponsible breeders, they are in essence supporting the sickening trade in puppy breeding and dealing.”

For more information about back yard breeders and puppy farms, see this page.

Andrew Summerfield Tortures His Loyal Dog & Dumps Him To Die

Andrew Summerfield, aged 43-44 from Colchester, Essex, in the UK, shot his loyal and trusting dog, Barney, 10 times with an air rifle, then set about hacking at his skull and face with a meat cleaver.

Sick Summerfield then tied a noose tightly around Barney’s neck to strangle him, making him suffer even more, and dumped him on a road side, still alive. When Barney was later found, he was still suffering in agony. Sadly, his suffering was so severe that he could not be saved and was euthanised.

Many Ways You can Help stop Animal Cruelty And Suffering